Hudson keeps getting bigger and looking more grown up all the time, and continues the streak of having "funny" school pictures without his typical smile. 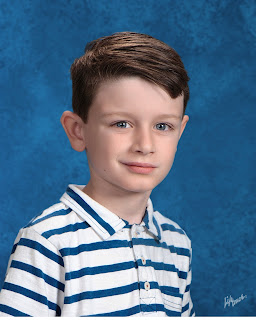 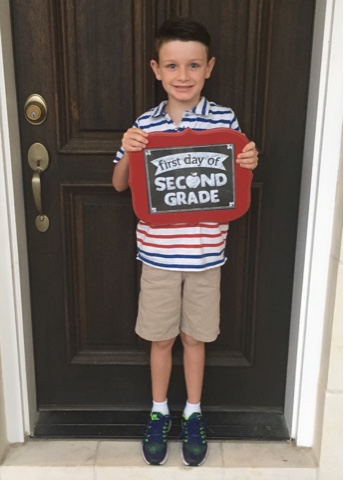 We have a very excited 2nd grader today.
Thankfully one of his best buddies got the same teacher. At meet the teacher night, we found out that about 4-5 kids are from his class last year and 4-5 are from his kindergarten class so he knows over half the class. (There are 5 2nd grade classes, btw. )
Posted by Kirk at 7:34 AM 2 comments:


Skittles Award for bringing the gift of Ingenuity to the class. Mrs. Phan spoke highly of Hudson's clever, original and inventive ideas. (I was just happy it wasn't the "Verbose" award for talking too much in class.) 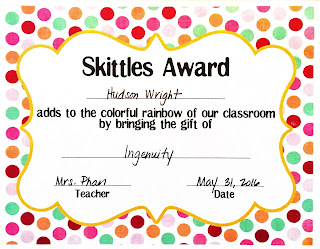 Hudson was one of four students in his class to earn his Math Super Star award. He earned this by doing extra math homework each week that introduced more advanced concepts than what the class was doing in the normal curriculum. (I have to admit some weeks this was viewed as fun and some weeks as a major drag, but he did it enough to earn the award.) 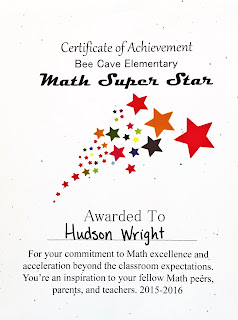 And finally an end of year recognition for representing the six character traits that the school expects each student to model. While I think all the kids get this one, I really appreciate what Bee Cave Elementary does throughout the year to teach and model these - trustworthiness, respect, responsibility, fairness, caring, and citizenship. 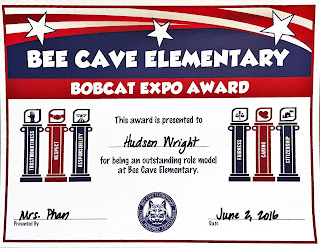 
I'm about two months delinquent in publishing this, but here is Hudson's class picture. Mrs. Phan has been a fantastic teacher for Hudson - the perfect combo of firm structure delivered with a very soft tone and voice. 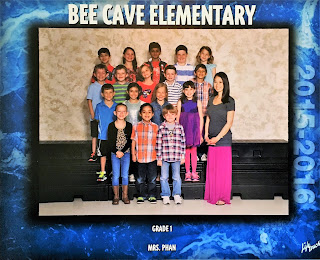 This week was Hudson's class' turn to lead the school announcements on their daily morning "TV" broadcast to the school's classrooms and do a presentation at their school assembly on Friday..

Here he is opening the announcements and leading the pledges. (Yes, we pledge to the Texas flag, too. It is Texas after all; a whole other country.) You can skip through the pledges, but there is a cute little part at the last couple seconds of the video too.

Here he is closing out their part of the announcements. He got a little nervous because he had to pick up an extra set of lines as one student ended up being out sick, but still did a great job.

On Friday their whole class did a presentation in front of the school at their assembly. Here are a few photos from the "after-party" where they got awards from the principal and their teacher for being TeRRiFiCC students after. He did a great job and was so proud of himself. 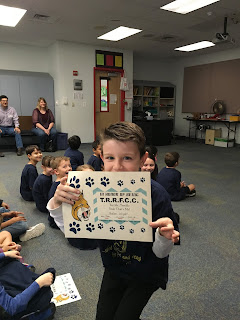 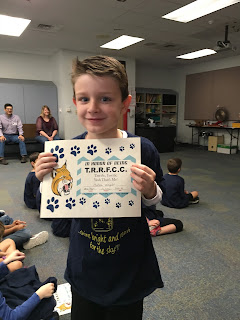 Slight delay in posting the photos, but Hudson had a great birthday. He had his 3 best buddies over. They played laser tag and video games at High Five then came back home for birthday ice cream sandwiches, foosball and a slumber party topped off with birthday donuts for breakfast. 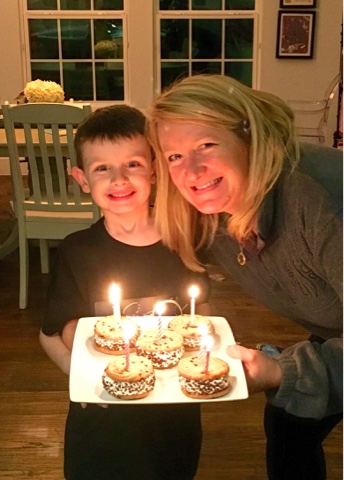 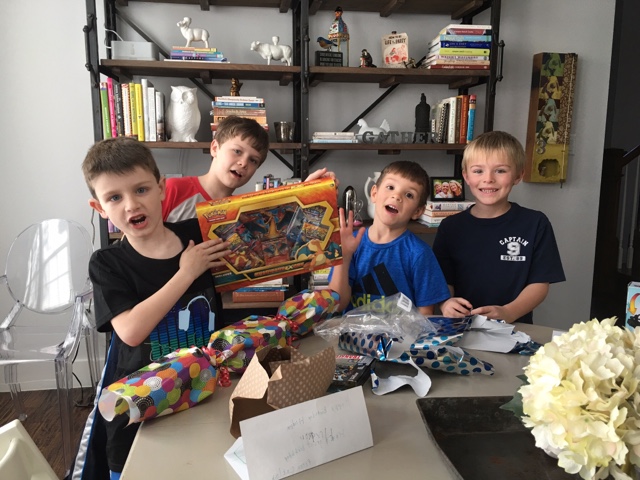 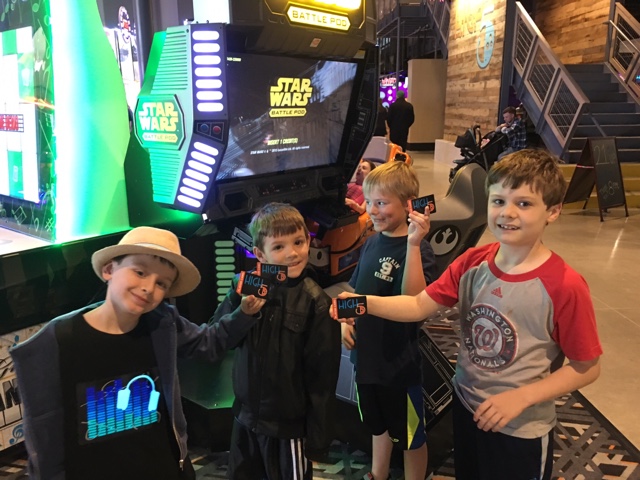 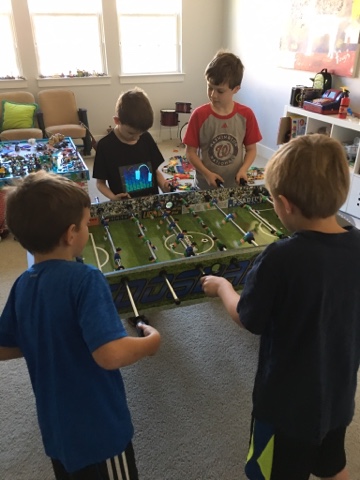 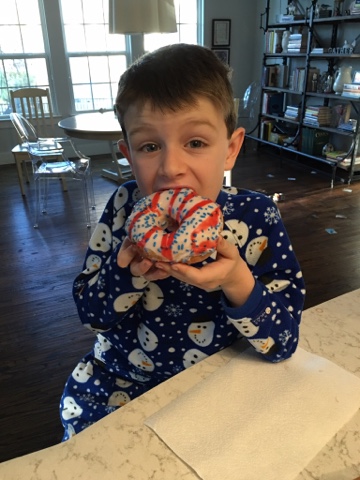 Buela and Papa came this weekend to celebrate Papa's birthday. A night out to see the Harlem Globetrotters was part of the celebration.
Hudson got to meet a few players, learn a trick and even do a dribbling drill prior to the game.
Lots of laughs by all. 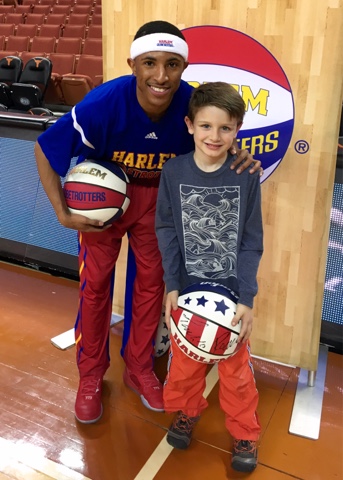 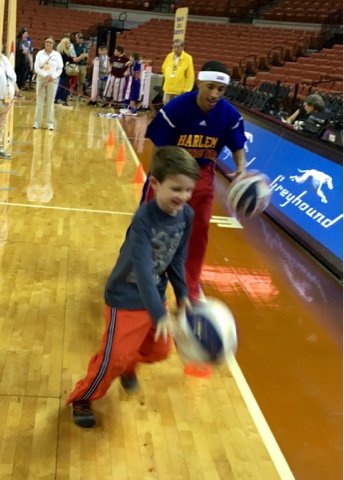 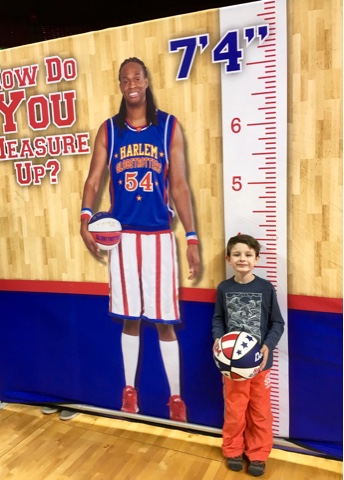 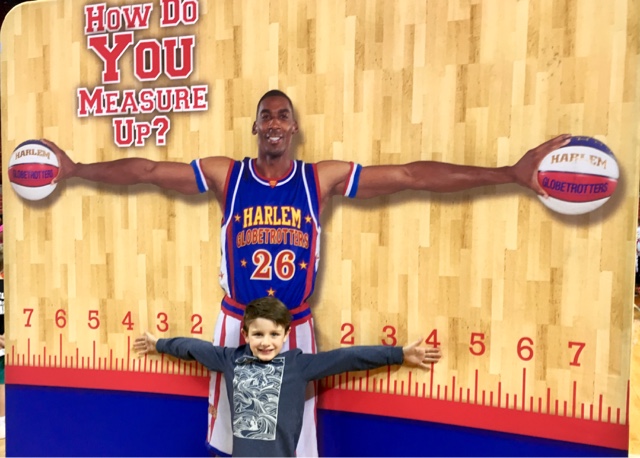 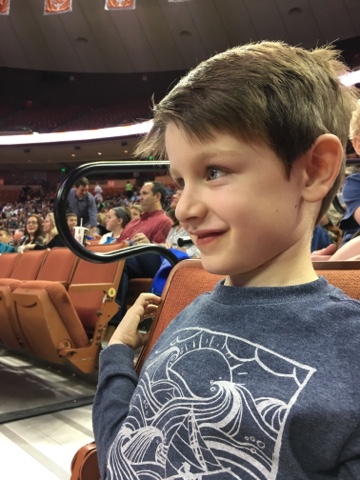